Lulworth Skipper is a butterfly I have been hoping to see for a number of years, so when Large Tortoiseshell butterflies began to be reported in the same area I started to make arrangements for the journey.  Covid19 restrictions/guidelines were still in place, so I booked a pitch on what was hopefully going to be a quiet campsite, gathered my camping gear, made sure I had everything I was going to need so there was no unnecessary shopping trips and started to look forward to my first trip of the year. 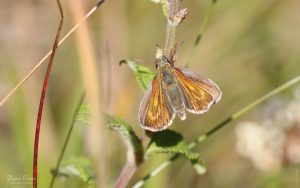 Set off from Bishop Auckland at 9:30pm on thursday evening, arriving at Tout Quarry car park on Portland soon after 3am.  The journey was trouble free with very few cars on the road and stopped once for a break soon after Bristol.  Arriving in the early hours allowed me to have a couple of hours sleep and some breakfast before beginning my first day on Portand.

Soon after leaving the car park I had seen two of my target butterflies, which were Lulworth Skipper (3 dark males) and Chalkhill Blue (1 male).  Other butterflies seen during the 2-3 hours at Tout Quarry included Grayling (4+), Gatekeeper (10+), Large Skipper (2), Small Skipper (1), Marbled White (10+), Large White (2), Green-veigned White (1), Common Blue (2) & Small Copper (1).  A Common Buzzard and a Peregrine were watched as they flew along the cliff face, but unfortunately had the wrong set up for photographs at the time.

After dinner I made the journey to check in at the campsite, which proved to be a big disappointment.  The campsite was far too busy, the amenities looked as though they needed a good clean and I didn't see any hand sanitiser anywhere.  With the Covid19 restrictions and related guidelines still being in place, I made the decision to wild camp instead.

Next stop was the ruins of St Andrews Church, where the reported Large Tortoiseshells had been seen earlier in the week. No joy with the tortoiseshell in the 3-4 hours I spent in the area of Church Ope Cove, but I did see Chalkhill Blue (6+), Comma (1), Red Admiral (2), Speckled Wood (2) and a very hard to photograph Common Lizard on the wall of the ruins. It was here where I two people from Wales told me the tortoiseshells had been displaying further along the coast at Verne Hill Road and set off to arrive at that location at 4pm.

I was told there had been up to three seen during the day and was hopeful of at least one dropping in before the temperature started to drop. 3-4 Red Admirals, a Comma and the odd Large White were seen before a single Large Tortoiseshell flew in and landed on the wrong side of a budlea head for approximately 5-10 seconds.  I watched it long enough to positively identify it, glanced at my watch to get the time and then it was gone.  Nice to see, but knew I had to revisit the area for better views.

The next 1-2 hours was spent looking for somewhere appropriate to camp and settled on a location at Fancys Farm, which was only a short walk away from where I had seen the tortoiseshell.  A secluded area with no signs saying 'no camping' or 'no overnight parking' and approximately 10-15 others wild camping there that night, so all was good. 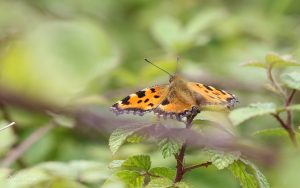 The area I chose to camp was in the grounds of the 'Verne High Angle Battery' at the top of Verne Hill Road, which was explored before going to see if the Large Tortoiseshell was showing on the same budlea I had seen it on the night before. Unfortunately, the combined low cloud and strong breeze meant nothing was flying in that area, so I decided to check out areas that would provide a bit of warmth away from the breeze and began to see the odd Marbled White, Gatekeeper, Red Admiral and Chalkhill Blue.

After dinner the sun began to put in an appearance.  Gatekeeper (20+), Marbled White (20+) and Chalkhill Blue (20+) appeared to be everywhere, so this is obviously a good area for these species.  It was around this time a very fresh Large Tortoiseshell was seen favouring a sheltered patch of Budlea above Verne Hill Road, which allowed me to not only get excellent views, but also grab a few nice photographs.  Well worth the effort.

By now, I'd seen just about everything I wanted to see and spent the rest of the day exploring the coastal paths and Tout Quarry in the hope of getting better views and photographs of Lulworth Skipper.

The weather had once again turned and with rain being set in for most of the day I set off to hopefully get a late Large Blue at Collard Hill in Somerset.  No joy with the blue's, but I did get Great White Egret (1), Marsh Harrier (1) and Grass Snake (2) at the nearby RSPB Greylake.