Visiting the Outer Hebrides had been a long standing aim of mine for a number of years and the journey through Lewis, Harris, North Uist, South Uist and finally Barra did not disappoint.  A total of 100 different species of birds were seen from driving on to the ferry at Ullapool and driving off the return ferry at Oban.  Minke Whale, Bottlenose Dolphin, Common Dolphin and Harbour Porpoise were seen during the ferry crossings with backdrops of some amazing scenery.  If you are interested in my itenerary and experiences, please read on:

Camping sites I would recommend 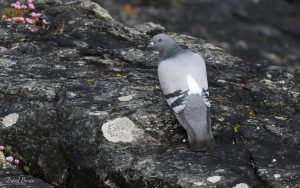 The crossing to Stornaway produced Guillemot (500+), Great Skua (10+), Black-throated Diver (3), Puffin (30+), Razorbill (20+), Gannet (20+), Fulmar (2), Kittiwake (10+), Shag (10+), Bottlenose Dolphin (20+) & Minke Whale (1). Shortly after leaving the mainland a HM Coastguard helicopter performed a practice emergency pick up from the ferry in calm conditions.  The exercise appeared to go well (hats off to the team and all those who risk their lives for others), but it did distract me from the birdwatching for 15-20 minutes and I could easily have missed something during this time.

Arrived on Lewis at 13:15. Three Black-throated Diver and a Ringed Plover were in the harbour with a number of the more common gulls.  Seven probable Tundra Bean Geese were with Greylag Geese at Borve before being spooked by me stopping the car. Hooded Crows (approx 6) were seen during the drive to the Butt of Lewis where Wheatear (2), Rock Dove (4), Fulmar (40+), Shag (2), Skylark (1), Oystercatcher (2), Kittiwake (10+), Lesser Black-backed Gull (2), Greater Black-backed Gull (2), Bottlenose Dolphin (3+), Rock Pipit (2), Great Skua (1), Ringed Plover (2), Redshank (4) and Dunlin (7) were seen.  Looked good for seawatching and would definitely like a return visit in the future. 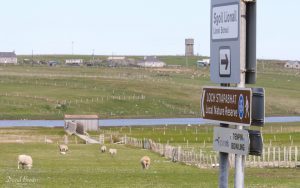 Loch Stiapabhat Nature Reserve was next, where I heard at least four Corncrakes on my way to the hide.  Common Sandpiper (1), Lapwing (2), Black-headed Gull (10+), Whooper Swan (3), Mute Swan (2), Coot (1), Teal (1), Mallard (2) and Shoveler (2) were seen from the hide. A rare American Bittern had been seen during the previous week, but hadn't been reported for a few days so wasn't expecting to see it.  That’s twice I’ve been too late for this species of Bittern.

On the way to Ardroil campsite I stopped at an inlet to watch a couple of Ravens and the location was so quiet I decided to wildcamp there.  Black-tailed Godwit (1), Cuckoo (1), Stonechat (2), Northern Wheatear (1), Greylag Goose (3), Pied Wagtail (2), Common Sandpiper (1), Grey Heron (1) and at least two unidentified Fritillaries were seen. 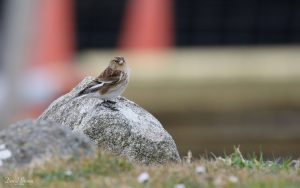 Harris itself was a total change in scenery, where the landscape suddenly changed to more mountain and rock.  The Drive through the mountains was very quiet with the only bird of note was a Dipper, which was seen flying up a mountain stream.  The weather had now become cloudy with occasional drizzle, which was probably why no raptors were seen during the drive to Ardhasaig.  From here I decided to drive to Hushinish, where Golden Eagle (2), Great Northern Diver (1), Golden Plover (7), Wheatear (10+), Cuckoo (2), Raven (2) and Twite (6+) were seen.  By the time I left Hushinish it was raining heavily, so I decided to settle down for the night.  This was earlier than expected, but it seemed the sensible thing to do at the time.  Two deer were seen walking down the mountain before going to sleep at about 10pm. 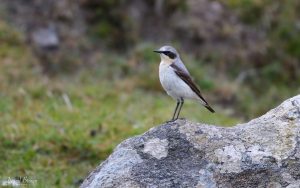 Set off early and enjoyed a slow drive for Berneray, where I was booked to get the 10:30 ferry to Leverburgh.  Common Buzzard (1), Fieldfare (1), Wheatear (4+) and Starling (10+) were seen from the mountain road to Tarbert, where I watched an otter fishing in the loch.  Common Gull (1), Red-throated Diver (2), Curlew (1), Oystercatcher (2), Stonechat (2), Black-headed Gull (4), Blackcap (1), Robin (1), Wren (1), Common Whitethroat (2), Common Tern (2), Linnet (1) & Raven (a nest with young ready to fledge) were seen before boarding the ferry.  Most notable during the drive was the scenery, which had become more rock and lochs than anything else (can't remember seeing so much contrasting scenery than what I seen in the drive through Lewis and Harris).

The crossing from Harris to North Uist produced good numbers of Great Northern Diver (30+), Cormorant (20+), Gannet (50+), Shag (100+), Eider (20+) and Grey Seal (20+).  An adult White-tailed Eagle was on one of the islands.  Oystercatcher (2), Black Guillimot (3) and Black-throated Diver (1) were also seen.  If I was staying in North Uist, I will seriously consider doing a day return journey for this crossing.

Arrived at Leverburgh before 11:30, where it was raining quite heavily and decided to park up for some lunch until the rain stopped.  The sun came out briefly at about 2pm, so I started to slowly make my way towards Balranald campsite.  First stop was Loch Sanndaraigh, where six Whooper Swans were seen.  I then went to the campsite and pitched the tent before having a good walk around the nature reserve.  Corncrake (3 heard and 2 seen), Dotterel (2), Corn Bunting (2), Lapwing (6+), Shelduck (2), Moorhen (1), Herring Gull (10), Sand Martin (1), Skylark (3), Eider (2), Rock Dove (1), Meadow Pipit (4), etc. were seen before the weather changed again at 7:30pm.  Another early night in preparation for a full day of birding the following day. 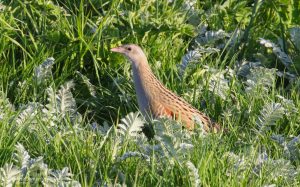 North-westerly winds provided the opportunity to do a bit of sea watching during the early hours of the morning with Pomarine Skua (2), Arctic Skua (4), Manx Shearwater (1), Gannet (10+), Great Northern Diver (3), Kittiwake (10+) and Fulmar (2) being seen in 1-2 hours.  After the seawatch I decided to go looking for raptors and got good views of Hen Harrier (2m & 1f), Golden Eagle (1), Buzzard (1) & Raven (2)  before returning to the campsite for lunch.

Corncrake (5), Corn Bunting (2), Shoveler (1), Buzzard (1), Redshank (1) were seen before spending another hour at the seawatching point.  This time there was little movement with nothing of interested being seen in one hour, so I decided to have a slow walk back to the campsite with Whimbrel (1), Ringed Plover (10+), Dunlin (30+), Turnstone (30+), Purple Sandpiper (2), Oystercatcher (10+) and Arctic Tern (40+) being seen seen.  After tea I had another walk around the reserve adding Short-eared Owl (1) and Moss Carder Bee to the list (a new species of bee for me). 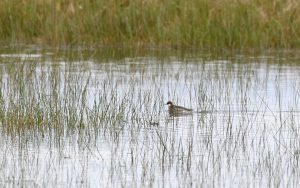 Decided to have a slow drive through North Uist, Benbecula and South Uist to get the last ferry to Barra.  A Short-eared Owl was seen when leaving the campsite and a pair of Corncrakes were seen mating in the paddock behind the RSPB Balranald visitor centre before setting off.

After leaving RSPB Balranald I had a look round Loch Sanndaraidh a Ruff, a Sedge Warbler and two Reed Bunting were seen.  Another Corncrake was heard close to the car and at least six Whooper Swans were still on the loch.  Before leaving North Uist I decided to have a final look for raptors, which produced two Short-eared Owls and a very distant species of Eagle. A Greenfinch and two Chaffinch were seen on feeders at a local house.  Stonechat (2) and Meadow Pipit (4+) were also seen.

A ringtail Hen Harrier was seen when entering Benbecula. Two Red-necked Phalaropes were at Griminish.  Little Tern (2) and at least seven Black-tailed Godwits were seen with other waders at a nearby beach.  Coot (1), Moorhen (1), Little Grebe (1) and Gadwall (2) were seen at Coot Loch. A drake Garganey was at Lock Bi, but failed to connect with the long staying Little Egret (a rare/scarce sighting on the islands). 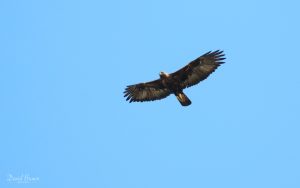 Next stop was Rubha point, where I was hoping to do a bit of seawatching.  Unfortunately nothing was moving, but it did provide me with good views of at least three otters sharing a fish or eel one of them had caught.  After this, I headed towards Eriskay for the ferry and soon after pulling up I heard the call of a Golden Eagle and spent the next few minutes watching the eagle soaring above my head.  A perfect way to end my time on North Uist, Benbecula and South Uist.

The ferry to Barra was quiet with the only noteworthy addition being a distant species of eagle over Barra. Once on the island, I quickly pitched the tent and made my way to see the reported Purple Heron, which showed reasonably well.  Other birds in the last 1-2 hours of daylight on Barra included Grey Heron (1+), Hooded Crow (2), Mallard (2), Moorhen (1), Willow Warbler (2 heard), ChiffChaff (1 heard), House Sparrow (6+), Starling (10+), Swallow (2), Great Black-backed Gull (1), Lesser Black-backed Gull (4+), Herring Gull (20+), Common Gull (10+), Stonechat (1) & Meadow Pipit (3). 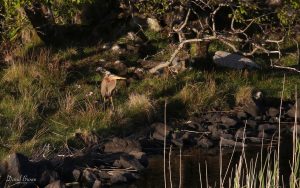 A full day on Barra with 50 different species seen during the course of the day. Nothing too different to what had already been seen, but it was interesting to see how valuable the small wooded areas are to the islands birdlife. 2-3 accessible wooded areas had Spotted Flycatcher (1), Willow Warbler (6+), ChiffChaff (2+), Blackcap (1), Goldcrest (1), Robin (1), Wren (1), Woodpigeon (4) & Common Whitethroat (1).  Waders seen during the day included Knot (1), Dunlin (10+), Turnstone (10+) & Ringed Plover (10+). Reception with o2 on the island was almost non-existent in places for calls and there was even less 3g & 4g coverage, making it difficult to use the internet.  Luckily, Borve Camping and Caravan Site had wi-fi available when close to the amenity block.

View the photographs in the gallery below or choose to view a selection of them with the option to purchase without a watermark from my photography website at https://photography.daveb.co.uk/.